What are some must-know Japanese food facts?

Well, there are plenty.

Japan is a top travel  destination for many reasons… including the food. So, what’s so special about Japanese cuisine? In this guide, you’ll learn some Japanese food facts! 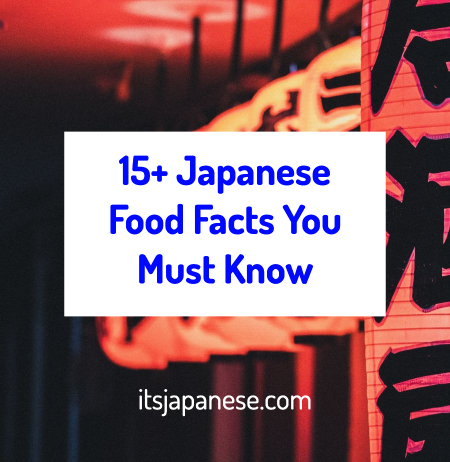 1) Fish is used in most Japanese dishes

This may be one of the more obvious Japanese food facts here. 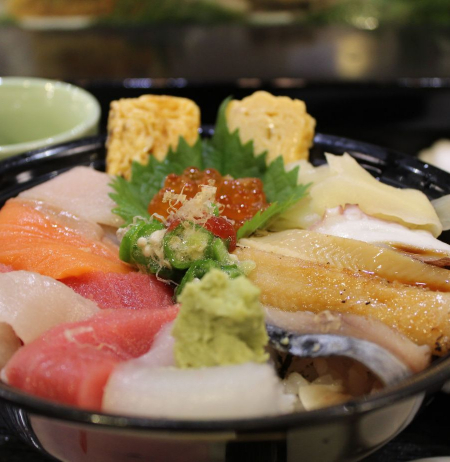 Japan is an island nation, so of course, fish would be common.

It’s difficult not to eat fish in most Japanese food, which can be particularly problematic for vegans and vegetarians. Even if the food doesn’t contain chunks of fish, the broth or base flavor of many dishes is made with fish broth. Fish is one of the main reasons Japanese cuisine has a distinct umami flavor.

2) Every region has a distinct food culture

Although Japan is just slightly larger than Germany in land area, every region has their own distinct food culture.

One of the most enjoyable aspects of traveling in Japan is that you can eat something special from every place you visit. If you visit Osaka, you’ll find all kinds of street unique Japanese foods like takoyaki and okonomiyaki. In Kobe, you’ll find delicious Kobe beef or Akashiyaki.

Along with distinct regions, Japanese cuisine reflects the seasons.

Japanese people will eat more soups, hotpots, and warm dishes during the cold months, like “Oden.” In the Summer, dishes like cold somen noodles with ice are popular. During spring-time, you’ll see cherry-blossom related food and drinks. In the fall, you’ll see persimmons. Of course, that’s just scratching the surface – there’s lots more.

Even with fast food. For example, if you go to a McDonald’s in Japan, you’ll notice seasonal menu items that use seasonal ingredients.

4) Japanese food is not spicy

The flavors of Japanese food are mild and straightforward. Japanese cuisine values the taste of authentic ingredients instead of flavoring them with strong spices. This is why many people in Japan cannot handle very spicy food.

Many Japanese dishes use soybeans as a base. 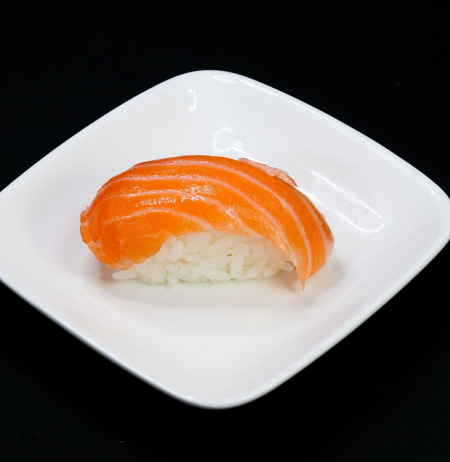 When sushi was first invented, it was a preservation method so that the fish and rice wouldn’t spoil.

The first sushi was a combination of fermented rice and fish. These days, people enjoy sushi as a fresh eating experience. However, you’ll still notice that the rice is always vinegared. 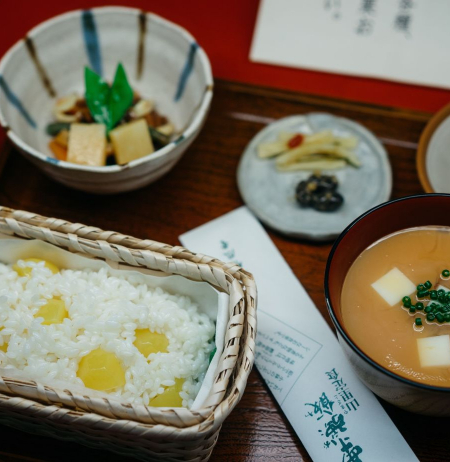 You’ll find rice, pickles, soup, and several dishes in a typical meal. This eating style is well-balanced because you can eat many different types of ingredients in one meal. It’s also easier to be satisfied after eating because you feel like you’re eating a lot. Still, each part of the meal is relatively small.

Many Japanese people eat rice several times a day, and rice is a staple in their diet.

In Japanese, the word for food (gohan – ご飯) also means rice because it is such a central part of every meal. In most Japanese households, families will cook many side dishes with rice. 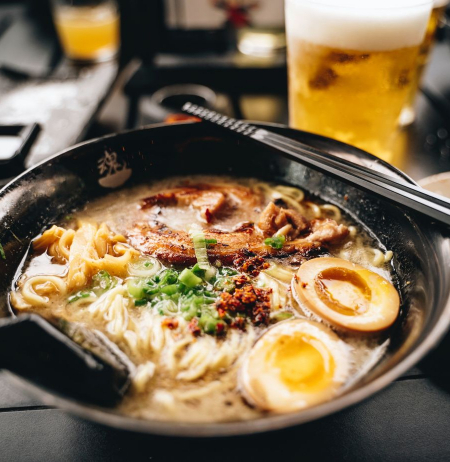 Ramen has become known worldwide as part of Japanese cuisine. But, it was brought to Japan by Chinese immigrants in the 1900s. As it spread in Japan, new takes on the Chinese dish developed, making it into what it is today. There are distinct Japanese flavors like tonkotsu ramen and miso ramen.

10) Most wasabi is not real wasabi

Most wasabi you’ll encounter is likely not real wasabi.

Real wasabi is hard to cultivate because it requires clean and pure water. Before chefs serve the wasabi, it needs to be freshly grated. Real wasabi is not as spicy and strong as the “fake” wasabi and allows the flavor of the fish to go through. “Fake” wasabi, on the other hand, is usually made with horseradish and mustard flour. This is what gives it a strong taste that can sometimes be overwhelming.

11) Plating and presentation are as important as the food 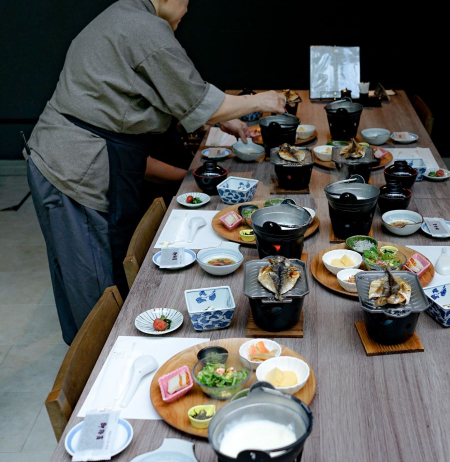 An essential part of Japanese cuisine is that care is placed into the plating and presentation of the food.

Each dish typically gets a special plate. It’s rare to eat a Japanese meal on one plate. Instead, there is a unique long plate for fish, separate bowls for rice and soup, and mini plates for pickles.

12) Japan has one of the most expensive fruits 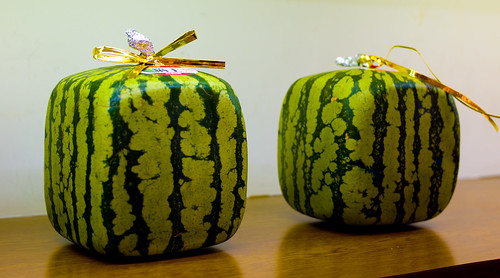 Japan’s fruits are a unique element of its food culture.

And as such, you’ll find some super expensive Japanese fruit. For example, in one fruit auction in Japan, a cantaloupe melon went for 22,000 dollars.

But why are fruits so expensive? Well, there’s normal fruit too. But in regards to the expensive ones, 2 reasons. One, expensive fruits are popular gifts in Japan. And two, all the work it takes to produce them. Engineering and research have made Japanese fruits — like the Ruby Roman grape, White Jewel Strawberry, and more — the most beautiful looking and sweet-tasting fruit.

All across the globe, wagyu beef is being sought after for its fattiness and flavor. Wagyu beef is about 40 times more expensive than regular beef. The marbling of fat in the meat gives it a juicy and indulgent mouthfeel. 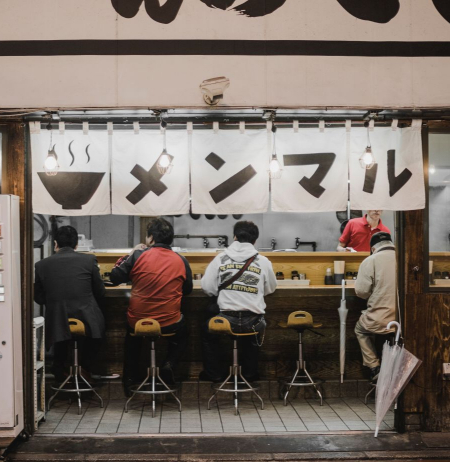 Instead of using spoons, it is customary to sip soup straight from the bowl. Although it might be weird for those used to spoons, the only tool you need to eat traditional Japanese food is chopsticks in Japan.

In Japan, if you go to a ramen shop, you’ll be greeted by the sounds of everyone slurping their noodles. Although this is considered rude in the West, it is welcomed in Japan.

Japanese people think that it is the best way to enjoy hot noodles and show appreciation for the food.

Conclusion &  Back to You

Now you know about some Japanese food facts.

What are your favorites? Which ones were you surprised by?

All About Japanese Sushi vs American Sushi: 3 Differences