Wondering what’s the difference between Japanese sushi vs American sushi?

Well, to understand the difference between the two…

In part 2, you’ll learn how American style evolved out of the original style.

And in part 3, you’ll learn the differences between the original dish and its American cousin. 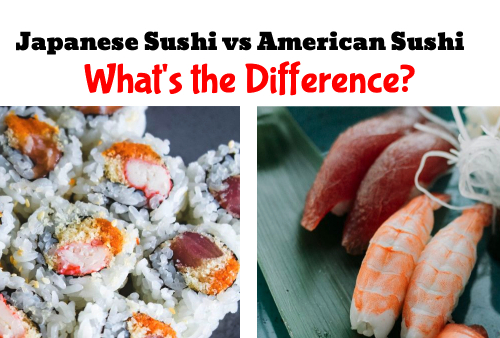 Sushi is one of the most representative dishes of Japan. It consists of a bed of vinegared rice with ingredients such as nori (Japanese seaweed), raw fish, and vegetables.

Although we tend to associate sushi with fresh fish, the origins of this food comes from fermenting fish with rice and vinegar. It was meant to be a food that wouldn’t spoil easily. As time went on, people began to serve sushi with fresh fish on top of vinegared rice. The modern concept of sushi became popular around the 1800’s during the Edo period.

Sushi can come in many different forms. However, the most important element of sushi is the vinegared rice.

Here some common types of sushi that you’ll come across…

These are small oval shaped balls of vinegared rice, topped with sliced ingredients. They usually feature fresh raw fish and it is eaten with soy sauce and wasabi.

This is the most popular type of sushi. 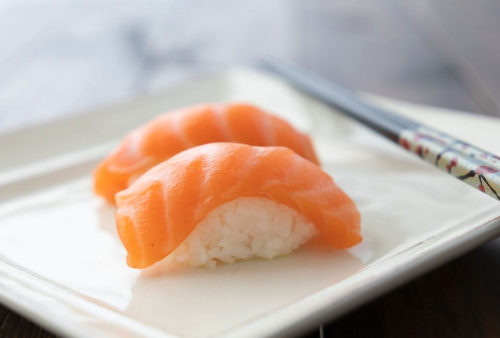 This is a special type of sushi that is pressed into a rectangular mold. It is popular to make at home because the shapes are easy to form. The mold is filled with rice and fish, then pushed together. 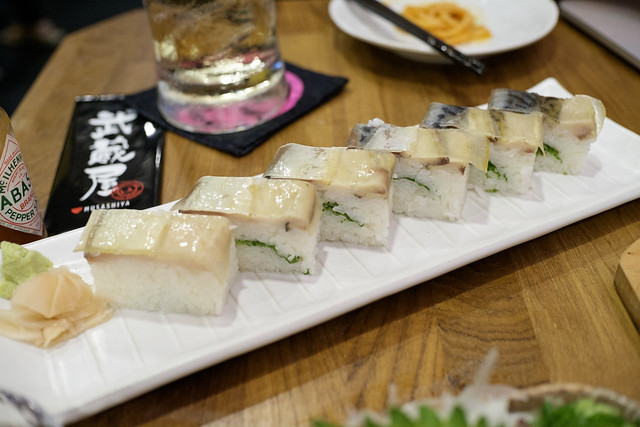 Temaki means “hand rolled” in Japanese. These sushi are cone shaped because the nori seaweed is wrapped around a ball of rice and ingredients. It is an easy and popular way to eat sushi. 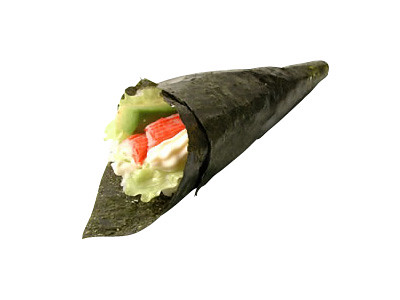 This is when sushi is rolled into a cylinder shape using a special bamboo mat. The nori, rice, and ingredients are placed onto the mat and rolled by hand. In Japan, the rolls can either be very thin or thick.

Note: When you think of sushi, you may think of “rolls.” Well, rolls are just one small part of sushi. As you can see here, there are other types. 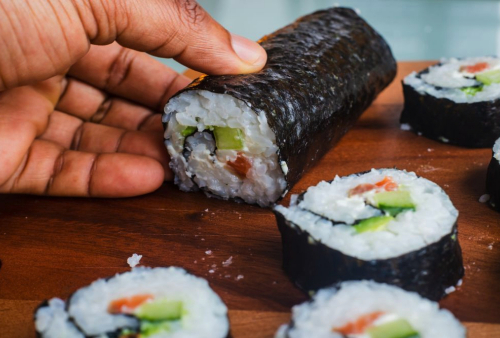 A common party sushi is chirashi sushi. This is a very colorful sushi featuring different ingredients. These are scattered on top of the rice in a big bowl. It is a nice way to enjoy different flavors and ingredients together 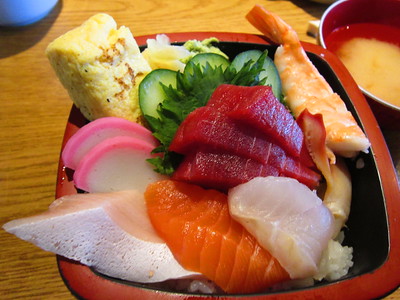 This is a sushi where the vinegared rice is covered by seasoned deep fried tofu. Although it doesn’t use any special ingredients like raw fish, it still features an umami rich flavor. It’s popular to pack these inside bento boxes for lunch. 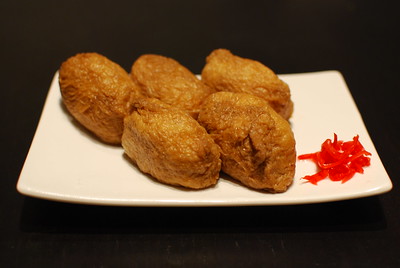 Now, onto the American style…

American sushi is like Japanese sushi, but there is a stronger focus on sushi rolls. These rolls tend to have many flavorful ingredients inside, with sauces and toppings to add more flavor. The sushi is more colorful and is made to please American tastes.

Sushi is said to have arrived in the 1960’s with the opening of a restaurant called Kawafuku in Los Angeles, California. During this time, Americans were not as open minded and were not as eager to eat raw fish. This is when new types of sushi were developed. The new sushi masked the flavors of pure raw fish with familiar things like mayonnaise or cheese.

These days you’ll find sushi in American supermarkets and restaurants. Because of how different it is from the original sushi, Japanese people are usually excited to try American sushi.

American sushi is characterized by the many different rolls. Although you’ll also see nigiri sushi, most of the menu will offer rolls.

Types of Rolls in American Sushi

California roll was one of the first original American sushi rolls. These are filled with avocado, imitation crab, and cucumber. It was created for Americans who were not open to eating raw fish. 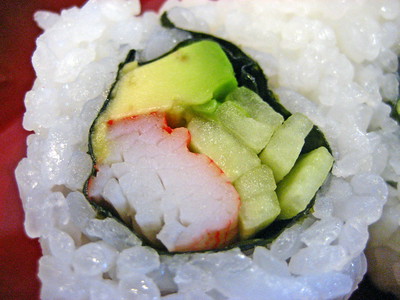 These rolls contain smoked salmon, cream cheese, and cucumber. Philadelphia is associated with cream cheese and it is popular on bagels with smoked salmon. Just as in bagels, these also fit perfectly with sushi rolls. 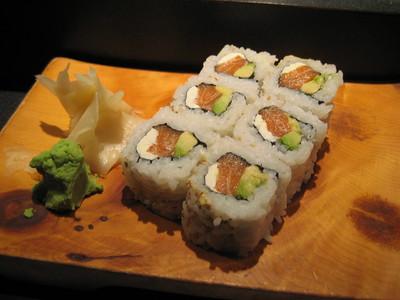 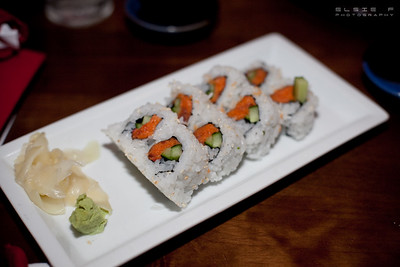 This is also a uniquely American invention, where entire sushi rolls are fried with batter. The crunchy outside can compliment the sushi well. The inside of the sushi can vary depending on the restaurant. 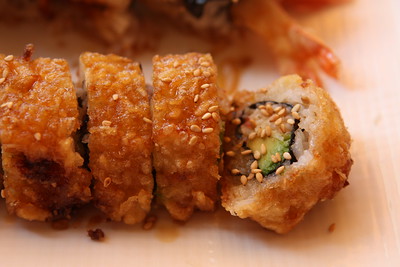 This is a roll that is filled inside with fried shrimp tempura, avocado, cucumber, and imitation crab. It is popular due to the crunchy texture inside. The roll doesn’t contain raw fish, so it is easier to eat for American palettes.

Let’s move on to the differences of Japanese sushi vs American sushi.

Since American sushi has developed into its own unique dish, there are many differences compared to Japanese sushi.

1) Taste. American sushi tends to use strong flavored ingredients like mayonnaise, spicy sauce, or cheese. In Japanese sushi, the main ingredients must be left in a relatively pure state so that you can enjoy their flavors.

2) Rolls. The other difference is in the sushi rolls. In American sushi rolls, there is a trend for the rice to be on the outside. This technique is called uramaki or inside out roll.  It was done to hide the black nori which was not appealing to westerners. In Japan, you’ll mostly see sushi rolls with the nori on the outside.

3) Ingredients. Another big difference is that Japanese sushi tends to use more “exotic” ingredients. There is a wide range of fresh seafood available because Japan is surrounded by the ocean. You might see ingredients like monkfish liver, horse mackerel, red clams, and even the poisonous fugu fish (pufferfish)… which isn’t so poisonous if cut right. American sushi uses more accessible ingredients like salmon, avocado, cheese, and imitation crab.

Now you know the differences between Japanese sushi vs American sushi.

And you now know how Americans adjusted sushi to fit their tastes.

Japanese vs. American Diet: 8+ Differences Between The Two