Wondering what the big deal about Japanese mayonnaise is?

And what’s the difference when it comes to Japanese mayo vs American mayo?

Well, keep reading. This quick guide will teach you all about: 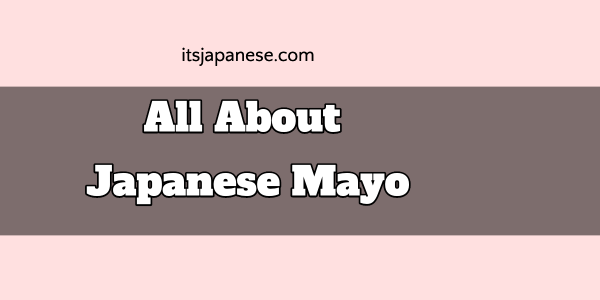 1) An introduction to Japanese mayonnaise

Japanese people are obsessed with mayonnaise and it can be found on everything from sandwiches, salads, and even on traditionally Japanese dishes like sushi, okonomiyaki, and yakisoba. It makes up an important part of Japanese food culture. Most households will have at least one bottle of mayonnaise in their fridge!

Mayonnaise first came to Japan around 1925, after Toichiro Nakashima tried it for the first time in the U.S. Nakashima later became the founder of the first Japanese mayonnaise company called Kewpie. He felt that mayonnaise could make Japanese people more healthy and well-nourished. 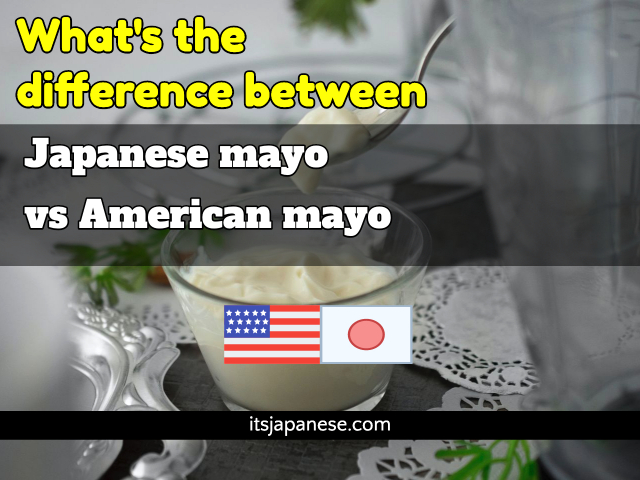 So, Japanese mayo vs American mayo…

They are about the same. For example, a 14g serving of Japanese mayo (Kewpie) is around 100 calories. This is almost the same as in American mayo (Hellmann’s) which is 101 calories.  The main nutritional differences are the saturated fat and sodium content in the two mayonnaises. Japanese mayo has a bit more saturated fat and sodium, so keep that in mind if you’re watching your diet.

The biggest difference between Japanese and American mayo are the ingredients. To better suit Japanese tastes, Japanese mayo uses rice vinegar as opposed to distilled vinegar. It also uses MSG or monosodium glutamate, which has been traditionally accepted in Japan. In the U.S., there are mixed opinions about the health effects of MSG. This is why the American mayo does not contain MSG. The other key difference is that Japanese mayo only uses egg yolks, while American mayo uses the whole egg. Japanese mayo tastes richer, has a smoother texture, and looks more yellow.

In the U.S. it’s also common to see a wide variety of mayonnaise on the shelf. There  are ones with different flavors, made with different oils, or with lighter calorie options. In Japan, there may be different brands of mayonnaise but they are all very similar. This is because Japanese people have come to have a distinct concept and flavor of what mayonnaise should be like.

Recap of similarities and differences:

Kewpie and Kenko are the two leading brands of Japanese mayo. Although Kewpie is the original Japanese mayo, Kenko looks alike in terms of packaging and flavor. If you want to try the original flavor of mayonnaise that was brought to Japan, it’s recommended to buy Kewpie. However, Kenko is generally cheaper and almost identical. The only thing that’s particularly different is that Kenko doesn’t contain MSG.

4) How to make Japanese mayo compared to American mayo

Mayonnaise is made from emulsifying egg and oil. When making Japanese mayo, only the yolk is blended with the oil. Rice vinegar or apple cider vinegar, and other additives are added to the yolk before the oil is added. In the case of Japanese mayo, they always use an oil which is neutral or weak in flavor. This brings out the flavors of the vinegar and egg yolk. In American mayo, there is a bit less vinegar flavor and the addition of the whole egg when emulsifying it makes it less flavorful compared to Japanese style mayo.

Outside of Japan, we usually associate Japanese mayo as a topping on sushi. In Japan, mayonnaise is an essential part of many dishes and recipes! So, what kind of Japanese dishes have Japanese mayo?

Although it seems like a western food, potato salad is extremely popular in Japan. The ingredients are mostly the same as the western version, but the Japanese mayone and added rice vinegar makes a big difference in flavor. This is served in many places from Japanese bars to family restaurants.

B) Dipping sauce for dried seafood

A common way to eat dried seafood, such as dried squid and stingray, is by dipping it in Japanese mayonnaise. This is a great side dish with alcoholic drinks.

Baking bread with mayonnaise on top may sound weird in the west, but in Japan it is very common. In particular, you’ll find this corn and mayo bread in almost every Japanese bakery. The tartness and fattiness of the Japanese mayo becomes tasty when baked.

Japanese mayo is also a common topping for takoyaki or octopus balls. The rich flavor of the mayonnaise goes well with the octopus and other toppings.

Mayonnaise with rice might sound strange but a common type of rice ball is one which is filled with tuna and mayonnaise. Tuna and mayonnaise is a popular combination that is loved by children to adults. It can even be found as a sushi topping.

Japanese mayo is also an essential topping in okonomiyaki. These are savory pancakes filled with veggies and meat. It’s usually topped with a special sauce similar to worcestershire sauce, thin bonito fish flakes, and mayonnaise.

G) Used as a salad dressing

In Japan, it’s common to have Japanese mayo as a salad dressing with only mayonnaise. In the west, it would seem weird to put mayonnaise on top of  salad leaves but it is perfectly normal in Japan. The flavor of the mayonnaise works well as a salad topping due to its rich and slightly acidic flavor. This is one of the main reasons why Japanese mayo is so useful for Japanese people. It can act as an ingredient in many dishes as well as on top of a salad.

Are you a fan of Japanese mayonnaise? Do you prefer American mayo to Japanese? Leave a comment!

15 Japanese Food Facts You Must Know

All About Japanese Green Tea: 6 Types, Many Benefits & Brands