There are many types of Japanese tea out there…

But today,  we’ll focus on Hojicha.

You’ll learn all about this tea, the benefits, whether there’s Hochija caffeine to worry about, and how to make hojicha. 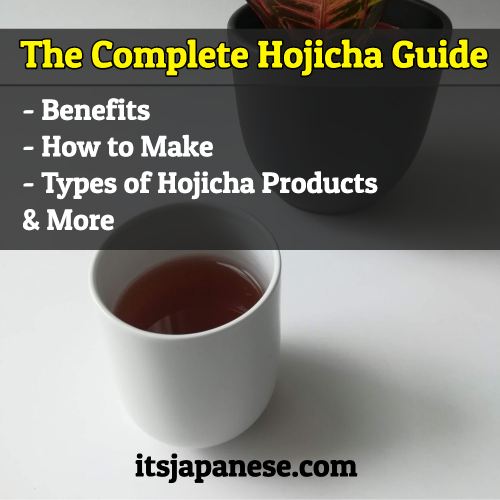 Hojicha in English (焙じ茶) is simply “roasted green tea.” “Houji” comes from the verb, “Houjiru,” meaning to roast. And “cha” is tea, or rather green tea.

So,  hojicha is a type of green tea that is roasted after it is harvested.

What about hojicha tea flavor?

Due to the roasting, hojicha has a less bitter and more milder flavor than regular Japanese green tea. It has a unique smoky and aromatic flavor and brown color. This makes it a great tea to have with meals or when you want to have a lighter version of green tea. You can also drink it hot or cold.

The type of green tea that is used for hojicha is usually low-grade. Hold on, that’s not a bad thing. With Japanese green tea, low-grade just means that the tea is harvested later in the season. The later harvest tea usually has more bitter flavors, and the roasting process helps to remove it. 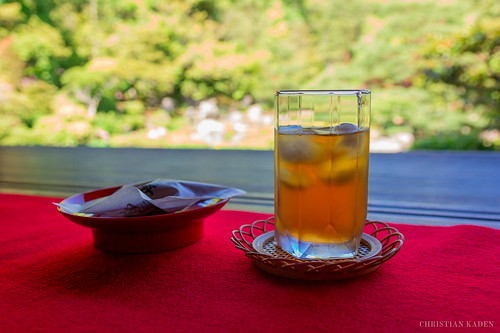 A Bit of History

The origins of hojicha as it is known today are relatively recent.

It started in Kyoto, Japan, during the early Showa period in the 1920s. During this time, there was an economic depression which made it difficult for tea shops to sell their teas. So, a large amount of unsold tea became too old to sell.

But, they figured out a solution…

The tea shops realized that it was possible to sell the old tea after roasting it, and the tea could be enjoyed as hojicha. This became widely popular across Japan, and the roasting process made it easier to sell teas that weren’t up to the standards of high-grade green teas.

In Japanese culture, hojicha is a part of everyday tea culture and is  a casual way to enjoy tea. The light hojicha caffeine content and mild flavor make it a wonderful tea to drink at any time. It’s also believed to be easier on the stomach than normal green tea.

Japanese people will generally drink hojicha — hot or cold — at any time of day, just like regular green tea. Since hojicha has less caffeine it may be enjoyed at night as well.

Hojicha has many health benefits because of its vitamin content. There is a considerable amount of Vitamin C in Hojicha, which helps with having healthy skin. In addition, other Vitamins like A and E also help boost your immune system and fight off colds.

What about caffeine? Does Hojicha contain caffeine?

Well, less so. One major difference between Japanese green tea and hojicha is the roasting process. This process makes the tea have less caffeine and a milder taste.

So,  it can be great for children and older people who may be more sensitive to caffeine.

In everyday Japan, you can see hojicha in many different forms.

Here are the various ways that you might find hojicha in Japan.

First there… the tea, duh. And just like other teas, you’ll find hojicha tea sold in:

Hojicha tea can be enjoyed hot or cold, and you’ll find it in a variety of places. Tea shops and supermarkets will sell the teas to make yourself. You can also find it in vending machines and convenience stores sold as bottled teas.

Hojicha in powdered form is also popular in Japan. Similar to matcha powder, you can use it to make a wide variety of desserts and drinks. Make sure to read the label of the hojicha powder to see how it should be used.

Some hojicha powders are made to dissolve instantly in water so you can enjoy instant hojicha, similar to instant coffee. Others might be meant for using as an ingredient in desserts.

Desserts using hojicha are also trendy in Japan. The flavor of the tea is very smoky and aromatic, making the desserts carry on that quality. Some examples of hojicha deserts include pound cakes, cookies, and puddings.

For example, you can get hojicha baking power on Amazon (see below.)

Hojicha lattes have become a staple at some coffee shops and cafes across Japan. Because of the lower caffeine content compared to coffee, some people will choose this as a latte to avoid excessive caffeine intake. The roasted flavor works well when mixed with milk. Unlike matcha lattes, the brown color can invoke a cozy feeling, especially during the colder months.

How to Make Hojicha?

Well, if you want to make hojicha latte or use hojicha power, the easiest way is to just get the goods on Amazon and follow directions on the package.

But, if you’re dealing with hojicha tea leaves, you’ll need some know-how.

Step 1: First, boil some water. With hojicha you don’t need to worry so much about the temperature. Hojicha works well with high-temperature water.

Step 2: Pour the boiling water into the teapot and tea cups to warm them up.

Step 3: Pour out the water from the teapot and cups.  Measure around 3 grams of tea leaves per person. Put the tea leaves into the pot.

Step 4: Pour the hot water into the teapot with tea leaves. Try to put just enough water for the number of cups you’re making.

Step 6: Pour into cups. Try and pour a small amount into each cup back and forth to get the same strength of tea in each cup.

Have you ever tried this type of tea?

Is it your favorite?

Or, do you prefer other types of Japanese teas?

A Guide to Japanese Nori Seaweed