Want to learn a bit about the Japanese daruma doll?

Stick around. This guide will teach you:

They’re modeled after Bodhidarma, the founder of Zen Buddhism.

What’s the Japanese daruma doll meaning or purpose? Well, these dolls are like good luck charms, and people believe that you can accomplish goals and wishes through them.

Think of them as a “Japanese goal doll.” Or something you get for luck.

One key feature  is that the doll will always stand up even if you push it over. This symbolizes the resilience of the doll and can motivate you to stand up no matter what hurdles you need to overcome to achieve your goals.

The origins of the daruma doll come from the Daruma-dera temple, located in the Gunma prefecture. They became popular at the temple as a way for local people to mold their good luck charms. From the 1800s, darumas came to symbolize the Gunma region and spread all over Japan. You’ll find the daruma doll in various shapes, sizes, and colors these days! Every year, there is even a daruma festival where thousands of people from around Japan gather to buy daruma dolls and celebrate the daruma at the original daruma temple.

Daruma dolls are a significant part of Japanese culture.

Japanese people buy them as good luck charms, and you’ll often see them on a shelf at a home.

They are also frequently referenced in children’s games and toys. Daruma san ga koronda is a children’s game that translates to “The daruma doll falls over.” It’s a game where one person stands in front, and those behind must freeze when the person standing in front turns around.

There’s also a traditional toy called daruma otoshi, which has a daruma head on top, with disks placed underneath it. It is played by hitting the discs and trying not to knock the daruma head over.

In pop culture, there’s even a pokemon called Darumaka that’s modeled after a daruma doll!

As you obviously know, they have quite an interesting design.

So, let’s talk about the doll design and what it all means. 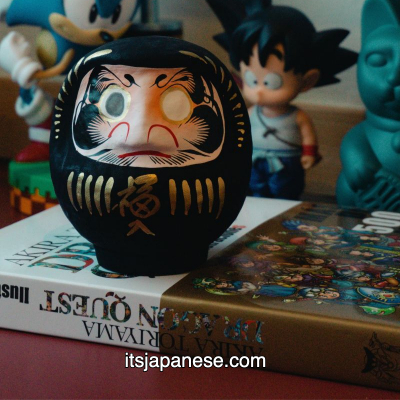 Are there different types of daruma dolls? Well, yes, but based on color.

So, let’s talk about the color first.

Is there a meaning behind the colors?

The color of a traditional daruma doll is red.

It comes from the color of the robes of Bodhidarma, a Zen Buddhist. From the 1600s to the 1800s, the color red also symbolized smallpox. Because there were many smallpox outbreaks back then, a way to pray for the illness to get better was by using the daruma doll.

In more recent times, there is a wide range of daruma colors.

Each color can represent a different kind of luck and goal that you’re trying to achieve. A gold daruma doll is more suited for financial success, and a pink one could represent romantic luck.

The eyes are an essential feature of the daruma doll and symbolize enlightenment. When you buy a daruma doll, the eyes are completely blank. The person trying to fulfill a goal will paint one eye and paint the other when the goal is accomplished. It is a promise to the daruma that when they help you achieve the goal, you’ll allow them to gain enlightenment and see with both eyes.

Craft workers make Daruma dolls from paper mache material. They designed these dolls always to stand upright, similar to a roly-poly toy that you can find in other countries. The doll’s construction is hollow inside with a weighted bottom part. The way it can stand upright no matter what is a vital feature of the daruma doll. This is how it symbolizes the resiliency of working towards your goals and wishes.

The angry daruma face is a standard look.

The facial features of the daruma dolls are bold and symbolic. Darumas usually have bold red lips and strong black facial hair drawn by traditional brushes. The eyebrows represent a crane, and the hair on the cheeks symbolizes the tortoise. Cranes and tortoises are symbolic representations of a long life span in Japanese culture. 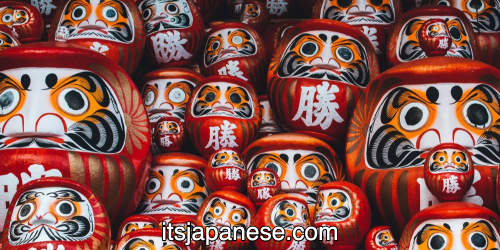 3. How to use the daruma doll

If you have a doll or want to get one of your own, you may wonder how to use it currectly. Or, which daruma eye to paint first, right? Well, here’s the process below.

But, if you do buy one, they usually come with instructions.

In Japanese tradition, you should purchase daruma dolls at the beginning of the year from a temple. According to the temple traditions, daruma dolls last for only one year.

Of course, if you don’t have a  temple nearby and are looking for daruma dolls for sale, you can check ’em out on Amazon.

B. Think of a goal or wish.

You’ll also need to think of a goal or wish. Depending on your daruma’s color, you should align your goal or wish to match the daruma. For example, if you have a gold daruma doll, it is usually meant for financial luck.

Once you have a doll and a goal you want to accomplish, take a paintbrush and some black paint.

Many people want to know which daruma doll which eye first is painted first. Well, while facing the daruma doll, fill in the left eye as you think about your goal or wish.

Find a suitable place for your daruma doll. This can be an altar or somewhere you can easily see him. Most will set it on a shelf.

E. When you hit a goal, finish the (paint) job.

When you meet your goal or wish, you can fill in the right eye of the daruma with a paintbrush and black paint.

F. Bring it back.

At the end of the year, you should bring it back to the temple so that they can burn all of the darumas.

This process is known as a “daruma kuyou” or a daruma memorial service. This ceremony is a way to express gratitude for your daruma and an opportunity to buy a new daruma doll.

Now you know a bit about the daruma doll.

What the daruma colors like red, white, and purple mean.

Where you can get a daruma doll for sale.

And which eye to paint first… if you get your own doll.

So, back to you. Tell me. Have you used one for yourself? And for what goal?

All About the Japanese Stone Lantern: The Toro & 8 Types

What are the Types of Japanese Dolls? 10+ Dolls Explained.