So, you want to know the difference between Japanese vs Chinese chopsticks?

Or, Japanese vs Korean chopsticks?

Oh, you will. This guide will give you the scoop on… 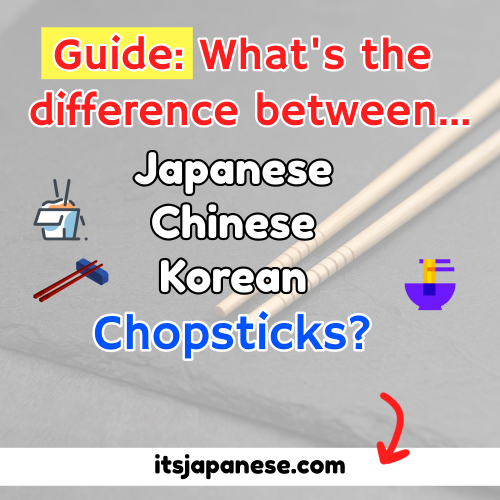 Chopsticks are a common eating utensil within Asian food culture. They feature two equal lengths “sticks”, that are held in one hand to pick up food.

But what is incredible about chopsticks is the depth of their history! Whereas the fork was first developed around the year 1000, chopsticks have possibly been around since 1700 BCE.

The origin of chopsticks comes from China, but throughout the time it spread to surrounding Asian countries. Today, you’ll see people use chopsticks for most Asian cuisine from Chinese noodles to Korean BBQ. Until 200 BCE, Chopsticks were primarily used as a cooking tool and spoons were the main eating utensil. As more and more people started eating rice in China, chopsticks grew in popularity.

Compared to a fork and knife, chopsticks are extremely versatile. They can be used to easily cook and mix food together. As an eating utensil, they can precisely pick up pieces of food. This works well with Asian cuisine because most of the prepared foods are cut into bite-sized pieces. Another reason for its popularity is the ease of production. The design of chopsticks is simple compared with Western eating utensils.

Although many Asian countries use chopsticks, they’ve each developed their unique take on them to fit their cuisine and culture. In particular, chopsticks from Japan, China, and Korea have distinct differences in their materials, sizes, and shapes.

So, if you’re wondering if there are any differences between Korean vs Japanese vs Chinese chopsticks…

Well… there are. Let’s dive in.

Unless eating Western-style food, Japanese people will use chopsticks for practically every meal. What makes them different from other chopsticks around the world is that they have a tapered design and a pointier tip. Traditional Japanese cuisine tends to focus on the flavor of the ingredients without using heavy spices. The chopsticks are designed so that they can hold and pick up food delicately to preserve the shape of the food.

Here are some common characteristics of Japanese chopsticks:

Chopsticks in Japan are traditionally wood, bamboo, or lacquered. The lacquered chopsticks are especially unique to Japanese culture. They can have intricate designs on the holding side of the sticks.

The size of Japanese chopsticks can vary depending on who is using them and what it is used for. It can be between 20-23 cm. Cooking chopsticks are much longer and children’s/women’s chopsticks can have a smaller length.

Because of the design, Japanese chopsticks are ideal for picking up food precisely. It’s also a great tool if you’re plating a dish for its aesthetics.

Chopsticks are important in Japanese culture and they are even placed upright in a bowl of rice as offerings to the dead. Family members usually have their own chopsticks that they use each time. Each chopstick is specific to the person using them. This is different from other cultures where there is not as much individual importance to chopsticks.

Chinese chopsticks have the most variety in terms of materials. They can be made from wood, bamboo, ivory, jade, or even silver.

The Chinese use slightly longer and thicker chopsticks than the Japanese. The measurement can be around 25cm.

Chinese chopsticks are able to easily reach food on a table. Compared to Japanese cuisine, they tend to share a variety of large dishes. This is why a long chopstick can be more useful.

Chopsticks are important in China because of their long history in the country. There is an old custom where chopsticks were even given as part of a dowry for marriage.

One of the most unique chopsticks in Asia are Korean chopsticks. This is because it is often metallic and has a flat-shaped design. Metal has been an important resource throughout Korea’s history. Korean cuisine also features many pickled foods such as kimchi. Easy to clean, metal chopsticks fit perfectly for the food culture of Korea. One thing about Korean chopsticks is that they can be hard to use for beginners. The metallic texture makes it very slippery if you’re not used to them. Fortunately in Korea, spoons are paired together with chopsticks which makes eating very easy.

Chopsticks in Korea are traditionally made from metal. In the past, it was common to find bronze or silver chopsticks. These days, they are typically stainless steel.

The size of Korean chopsticks is around 21.5cm. They are a bit smaller than Chinese chopsticks and it is paired with a long spoon.

Korean chopsticks are easy to clean because of the material. This makes them very useful for Korean dishes that have lots of red pepper. They are also used together with the spoon, unlike other Asian countries.

In Korean culture, chopsticks play an important role. Chopsticks and spoon sets called “Sujeo” are popular wedding gifts. In addition, silver chopsticks were used by royalty to detect if the food had been poisoned in the past.

5. Conclusion — Back to You

Now you know a bit about Korean vs Japanese vs Chinese chopsticks. What makes them different. What their unique uses are. What they’re made of.

If you’re interested, you can also get chopsticks for yourself via my Amazon recommendations above.

Which is your favorite?