Japan isn’t known really for entrepreneurship. There’s a strong preference for… getting a good job at a well-known company, risk aversion, and for fitting in.

They do exist. In this article, we’ll explore 10+ female Japanese entrepreneurs. Of course, there are more than 10… and we’ll update this article as we go along. 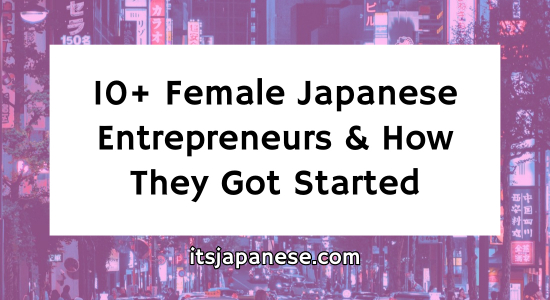 Yuko Seimei had a stable job fresh out of college in the banking industry. At the time, she had not put too much thought into what kind of work she wanted to do in her future. After working for years in a large bank, she made the bold choice to move to a small finance company with only 30 employees. Over time, she grew with this company, and they currently oversee around 2 million accounts. She became the COO of the company in 2019 due to her strong leadership skills and personality.

CEO of Hagoromo Foods, Saeko Goto is an important figure in the Japanese food industry. Hagoromo Foods was her family’s company that sold canned and preserved foods. She didn’t get involved in the family business until much later when she gathered real-world experience.

Goto holds an MBA from Stanford University and worked in management consulting before entering Hagoromo foods. Her experience abroad and knowledge in business have helped the company expand. They currently distribute a wider range of products and are involved in international markets.

In 2020, Miki Oikawa became the first woman CEO at POLA, a Japanese cosmetic company. Oikawa has been a part of the company for over 30 years and her contributions to the company have led her to occupy this leadership role. She strongly believes in her company’s values, which employ a high percentage of women and allow them to be able to raise children while working. In a male-dominated society, Oikawa feels that her mission is to empower women and show how women can fulfill their potential.

Haruna Takata is president of V-Varen Nagasaki, a professional soccer club. Takata comes from a business-oriented family. Her father is the CEO of Japanet, the company that owns V-Varen. She was originally working in Japanet and did not have any interest in soccer. After becoming involved with V-Varen, she came to understand the sport and grew an appreciation for the gameplay. Her leadership style emphasizes working together as a group and listening to all ideas from those around her.

Starting as an amateur fashion model, Arisa Sakanashi used her skills to start a magazine called 4MEEE. At first, it was created with four other friends. 4MEEE has become popular among women in their late 20’s and she also started another magazine called 4yuuu!. Although only in her 30’s she’s become successful in the media industry and has become the company president.

Megumi Oohigashi became CEO of ProjectF out of a need to figure out her career after moving to Hong Kong for her husband’s work. She managed to create her own business where she could work in her own time and in any location she wanted. This was the start of ProjectF, which is an online consulting service for women who want to create their own business and learn marketing skills. Since then, she’s also written two books meant to inspire women to create more opportunities for themselves and create their careers.

Born in 1993, Kaoru Joho is a young and passionate entrepreneur. She created her company called Tablecross Inc. while still a student at Rikkyo University. During her university days, she participated as an ambassador between her city in Japan and the city of Orlando, Florida in a friendship project. This experience made her realize the potential of businesses making an impact in society and inspired her own business.

Tablecross Inc. is a restaurant reservation app that gives a certain amount of money to poor children with each reservation. She hopes that by making a sustainable business, she will be able to impact society in the long term.

CEO of Cotree, Mari Sakuramoto started the business by looking into her own needs. She wanted to create a company that could offer counseling services online so that people can easily talk to a mental health professional. Her company focuses on those in the business industry and the various mental health concerns that come with it. Sakuramoto has been able to help numerous business professionals who tend to feel isolated.

Eriko Yoshii created a company called Miss Grand Japan after her own experiences participating in Miss Universe Japan. She felt that there was not enough support for those entering the contests. She wanted Japanese pageant contestants to be able to compete at an international level. Her company supports future pageant contestants by offering specialized training and helping them with their finances.

After thinking about ways to develop cities in Japan, Chika Tsunoda decided to create a company called Anytimes. This was an app that would be able to match people together who needed help solving everyday problems like changing light bulbs and putting together furniture. In modern Japan, she felt that there wasn’t enough interaction among people within cities. With Anytimes, people could help each other and create a sense of community.

In 2014, she decided to expand her company into the office. Tsunoda created Anytimes for Office which would allow offices to crowdsource and find solutions for their various problems. These apps have been featured in many Japanese media sources and it has allowed people to find help for problems they couldn’t solve on their own.

Entrepreneurship in Japan isn’t as hot as it is in the United States or say… Israel.

But that doesn’t meant there aren’t any female Japanese entrepreneurs.

Now, over to you. Who’s your favorite? Who else should be on this list?

10+ Famous Japanese Entrepreneurs & How They Got Started